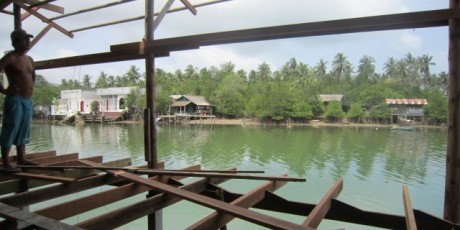 I have been visiting Thailand for many years. I stumbled across Koh Chang by chance during 2005; it is not the most publicised island. I sure don’t know why it is not publicised? It is Thailand’s 2nd biggest island and best kept secret.

Anyway, as soon as I got here I fell in love with the place. Not only is it stunningly beautiful, it just has a proper friendly island atmosphere and everything is very laid back. With it being an island the crime rate is low. (your average Thai thief does not have a speed boat to hand, so they have to use the ferries, where the police WILL be waiting for them!) The whole place has a friendly feel to it, the local people great you with the traditional Thai smile and a wai (A Thai bow). The farrang (Westerners) have taken on the Thai cha cha (slowly slowly) style and are generally happy to help everybody and are very chatty and approachable.

By trade, I am involved in the gas/oil industry. This gives me plenty of time off for holidays, and over the years I have found myself living here on KC. “Way Hay! Living in paradise! As nice as the island is, during the now called ‘Green Season’, it rains quite a lot, so generally I used to leave the island. By late may this year I had abandoned KC for the chaos of Pattaya.

The week before I left KC for Pattaya, I learnt a guy was going to rent what was an old fisherman’s house and now is ‘Moley’s resort’. I was truly gutted, I loved the area, had lots of friends living on the river bank and the place it’s self had fantastic views and what I think is great potential. Truly gutted.

Never mind, I thought. I had always been against the idea of opening any kind of hotel or bar in Thailand. But the location sold this place. I could not get it out of my head “Dam! Dam! Dam! I WANT THAT PLACE!”

At 7pm on 8th June this year, my phone rang while I was lording it right up in Pattaya. It was my best friend ‘Aom’, she told me the original who was going to rent the fisherman’s house has pulled out. He thought it was too much work to put right, it needed some major work doing. I could not believe what I has hearing. Really, I just could not take this information in. I thought it was very dreamlike and not really happening. None the less, I asked Aom to ask the landlord if I could meet him at 1pm the following day. That is as quick as you can get from Pattaya to KC, because there are no night buses.

The landlord and I signed said documents, money changed hands, everyone was smiling. I instantly knocked an interior bed room down, like 20mins after signing laughing to myself. That evening I took the landlord, his girlfriend, Aom and Breeze out to a nice sea food restaurant to close the deal nicely.

The next day I started ripping up floor boards and set about concreting 14 concrete stilts into the river bed to replace the existing rotten wooden ones. After 2 weeks of this, in blistering 40 degree heat, I realised I could not do this one my own. Breeze found me a crew of Burmese guy’s, who raised and renovated my floor structure and raised 1/3 of my roof level too.

They did a good job and left. I then took on a Cambodian crew, who did a none less then shite job. I sacked them after a week and half. I then found a good Thai team who worked with me really well.

Between us, we re-built the whole of the old fisherman’s house that is now known on KC simply as “Moley’s”. I am proud to say I designed this entire project. Right from the concrete stilts, the ground works, plumbing, to the last coat of paint. My home is now a lovely riverside residence that customers can come and stay at too. Or they can come and have a bite to eat or just relax, watch the picture postcard sunset! BLISS!